Submissions for The 2019 Toronto Queer Theatre Festival are now open!

The Toronto Queer Theatre Festival (formerly Gay Play Day) is a festival of short plays written by LGBTQ+ writers about the LGBTQ+ experience. We are now accepting script submissions from playwrights for this self-produced theatre festival.

2019 is our 8th annual festival of queer theatre and the first with our new name! This year's festival happens September 27 and 28 at the Alumnae Theatre.

Our submission deadline is May 15th. Entrants will be notified soon afterwards regarding their involvement in the festival.

Please email scripts to torontoqueertheatrefestival@gmail.com with "2019 submission" in the subject line.

We look forward to reading your scripts!

On this International Transgender Day of Visibility 2019, we are announcing that Gay Play Day is now the Toronto Queer Theatre Festival or TQTF. We have officially changed our name to be more inclusive of Toronto's evolving LGBTQ+ community. Please bear with us as we change our name and logo on all online platforms over the next little while.
Posted by Toronto Queer Theatre Festival at 13:27 6 comments:

The 7th annual Gay Play Day LGBTQ Theatre Festival happened on September 7 and 8 at Toronto's Alumnae Theatre studio space. We are a festival of plays written by Toronto area LGBTQ playwrights and their allies.

Our 2018 festival saw 2 completely separate line-ups of short plays - The PINK show and the LAVENDER show.

Charlie, who has facial blindness, attends a Queer Date Night with their friend Mel.

When does the quest to find love and companionship turn from longing to unhealthy obsession?

The End is the Beginning written by Tina McCulloch

Snapshots of the relationships between three women played out in reverse order.

A lesbian finds humour in the sometimes painful stories of coming out to the people in her life.

Mia and Danny are a lesbian couple who are in for a big change when Mia accidentally discovers a prescription for testosterone in Danny’s jeans.

Doris, a suburban housewife, discovers the joys of lesbian sex in middle age.

A flippant photographer trashes everyone in his life while waiting for a male model to arrive at his studio.


Thanks to all who joined us at the 2018 Gay Play Day LGBTQ theatre festival!


The 2017 Gay Play Day LGBTQ theatre festival took place on September 29 at 8pm and September 30 at 3pm and 8pm at Toronto's Alumnae Theatre studio space. We were thrilled to celebrate our sixth year of LGBTQ theatre by Toronto area playwrights.

The following plays appeared at the festival:

The Picnic by Tina McCulloch, directed by PJ Hammond

The Uglies by Nicholas Surges, directed by Michelle Lewis

Talking To Mom In Colour by Shannon McDonough, directed by Margaret Smith

Thanks once again to all of our playwrights, directors, casts and crew for a wonderful festival. A special shout-out to our audience members for their continued support. 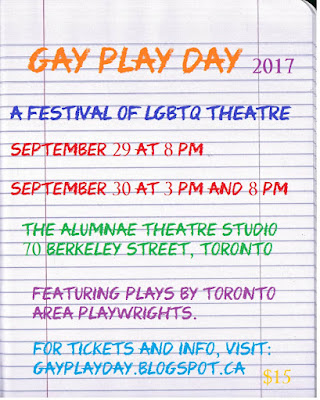 
Gay Play Day is a festival of short plays written by LGBTQ playwrights and their allies.

2016 was our 5th anniversary festival! We were thrilled to be back at our original home; the Studio at Toronto's Alumnae Theatre.

Peter and Donald written and directed by Philip Cairns

If  written and directed by Laura Piccinin 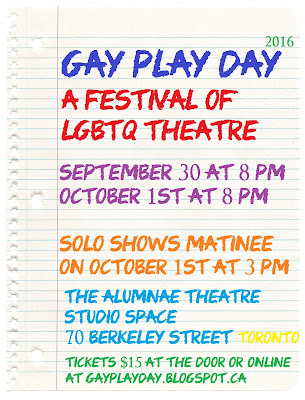 Our venue for 2015 was Fraser Studios at 76 Stafford Street in Toronto.

Gay Play Day 2015 featured 8 short plays by novice, emerging and established playwrights with one thing in common - the LGBTQ experience.

Our line-up for 2015, in no particular order, was as follows:

Thanks to everyone involved for a great festival! 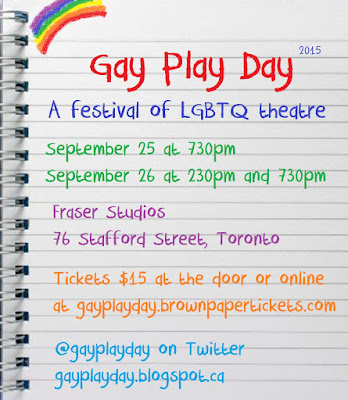 Gay Play Day is a festival of theatre by playwrights from the LGBTQ community (and their allies).

We celebrated our third annual festival at the Alumnae Theatre on September 26 and 27th, 2014.

Word Play by Nick May and Jess Bryson

I'm With AIDS by Warren Wagner

What Ida Said by Philip Cairns and David Bateman

All 5 plays appeared at each performance.

2014 saw our first trans participant appear on stage as part of the festival. 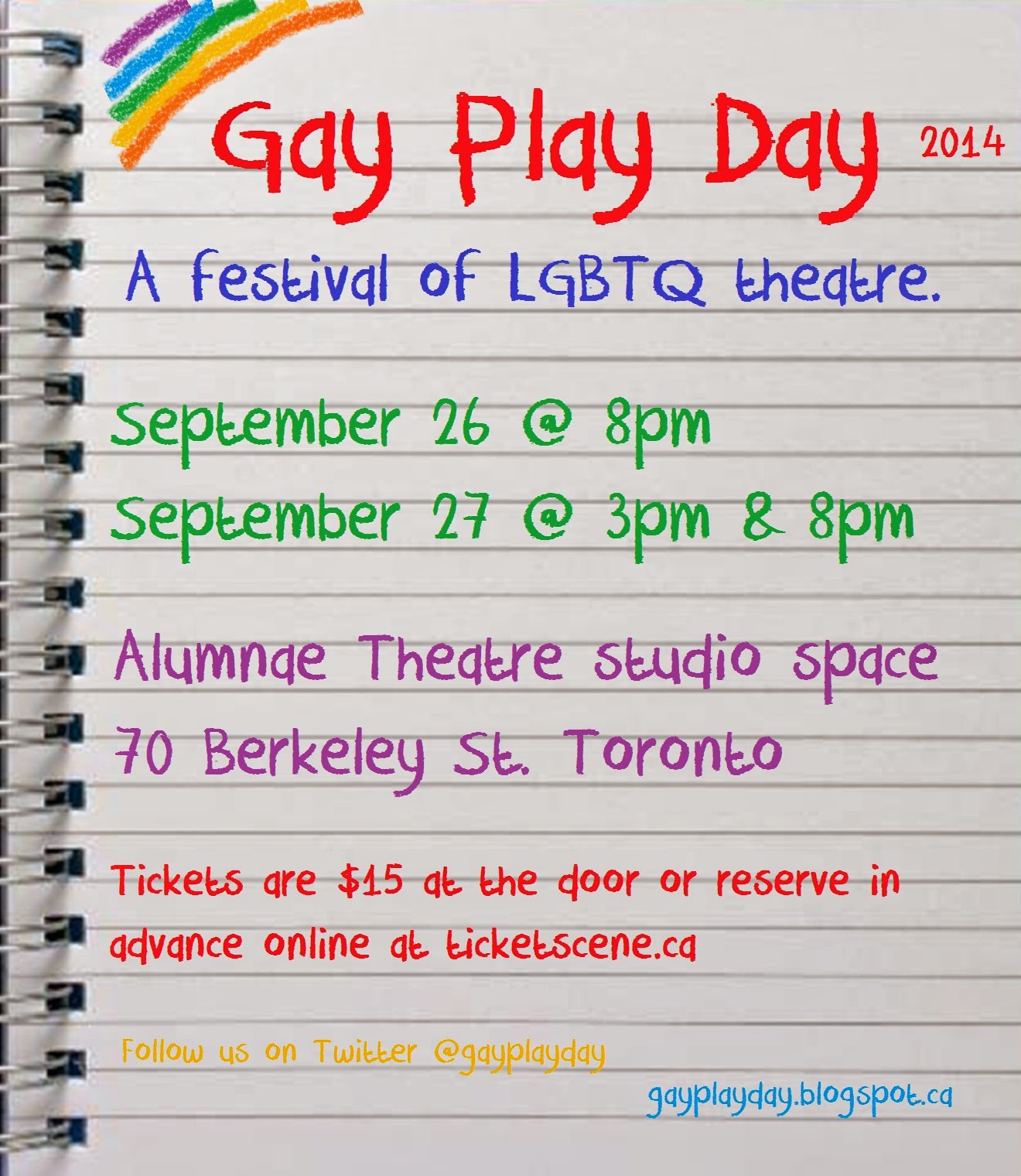 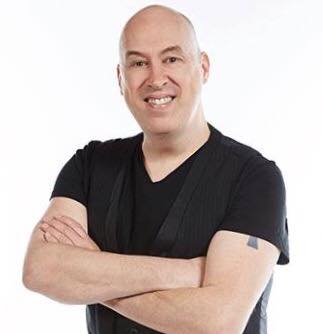 Darren is an award winning theatre producer, director and a member of the Playwrights Guild of Canada. He has produced/directed plays at Buddies In Bad Times Theatre, Toronto Fringe, Hamilton Fringe and at the United Solo Festival in New York City. His plays include Sherlock & Watson: Behind Closed Doors, The Judy Monologues, Ramblings of a Middle Aged Drag Queen, Misfit, and Fade To Black. Darren is the proud founder of the Toronto Queer Theatre Festival. 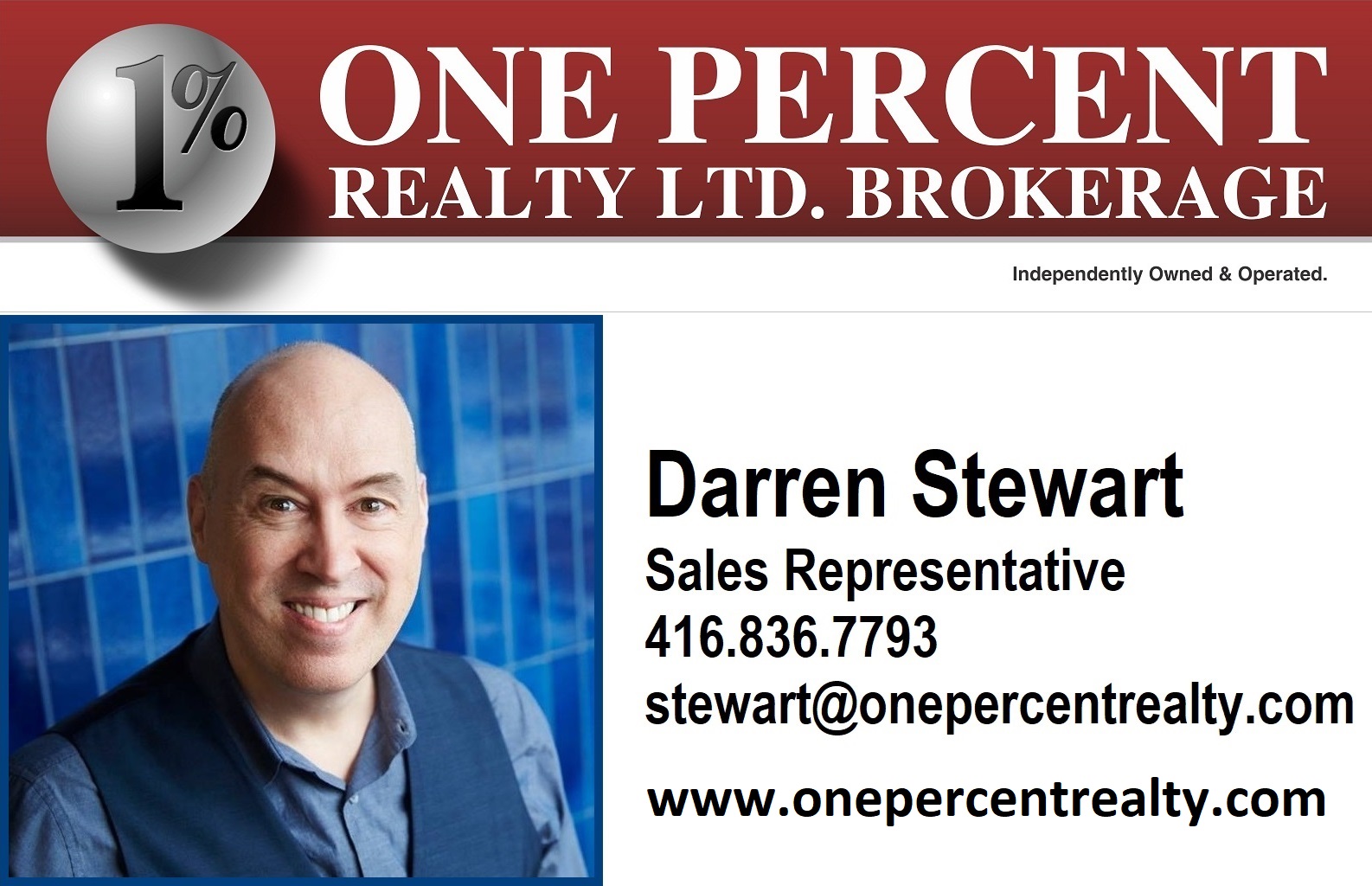